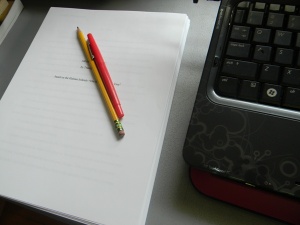 Nobody likes getting rejections, but when you get one with critique notes, you’ve hit the jackpot. It means that the reader liked your writing enough to comment on it, and give you some free advice. Who doesn’t like free advice from a professional? Especially one you hope to work with. What gets tricky, is how you take on that advice.

Each one of these approaches is a gamble, because you never know how the changes will affect your overall story, or how the person giving you the critique will respond to the resulting manuscript. I’ve done each of these over the years, with varying levels of success. You have to evaluate each approach every time you’re asked to make a change to see  which one might work. And still, as everyone who has  ever made an editorial change knows: once you change one thing, you have to change a hundred others to make it work.

Now it may not be hard to decide what to do if the changes you’re being asked to make are fairly small. But what do you do when the changes requested mean nearly a wholesale shift in the perspective of your novel?

My husband says this is good news. And it is. Only, to rewrite a novel in first person isn’t the simple matter of changing all of the “she said” into “I said.” It changes the entire vision. It changes the reader experience from one that comes from an omniscient third person narrator, and narrows it to that of a first person. (Though understandably, it would draw the reader in more.) Entire scenes will be lost. Ones that the main character never experiences, but ones that lend to the creepy atmosphere of the novel. Without them, the level of danger that she is in throughout may not be felt, because she never thinks that she is in that much danger until the end. In fact, she thinks of herself as almost invincible until she realizes, almost too late, what she’s really dealing with. And that element of distance, for the main character is something that I played upon in almost every scene. How am I going to deal with trying to do away with it entirely? And is there another way to evoke the danger surrounding her while keeping her unaware and still maintain a first person perspective?

The office dino is ready to tear into some edits! Roooaaar!

When I first got the note, I figured it might take about four months to make the necessary changes, but now I think I may need more time than that. And in that case, perhaps it would be better to show them something new. I could return to the first draft of my new book and whip that  into shape instead. That one is told in first person, though it’s entirely different from the story they just evaluated.

It’s hard to say what would be the best approach. But the nice thing about writing is that I can try a direction, and see if it works. If it doesn’t, no one will know but me. And my beta readers, if I get that far. So I’m going to press on with the edit as they’ve requested it. I’m going to try it their way and see if it does, in fact, work better.

After all, I’ve never been one to turn down free advice.